On May 20, 2020, Bitcoin formed a Golden Cross, a widely-tracked, long-term bullish indicator for classic trend followers.

The pattern surfaced as Bitcoin’s 50-day moving average crossed above its 200-day moving average, marking the first of such formations since February 18 and seventh in the cryptocurrency’s lifetime. Moving averages paint an accurate picture of a price trend by using older data and removing noise created by intraday fluctuations. But buyers didn’t step into the Bitcoin market on Golden Cross-FOMO that left the cryptocurrency vulnerable to a deeper downside correction. From painting the 50-100 DMA crossover until its local bottom yesterday, bitcoin plunged by $913, or circa 10%, to $8,800.

Not a standalone incident, Bitcoin’s immediate pullback after forming the Golden Cross was similar to price moves from February. Back then, the cryptocurrency rallied circa 60 percent, tested its long-term Descending trendline, pulled back, and formed a Golden Cross.

But the bullish pattern did not help bitcoin sustain its rally. The price fell by as much as 61 percent by March 13, 2020. 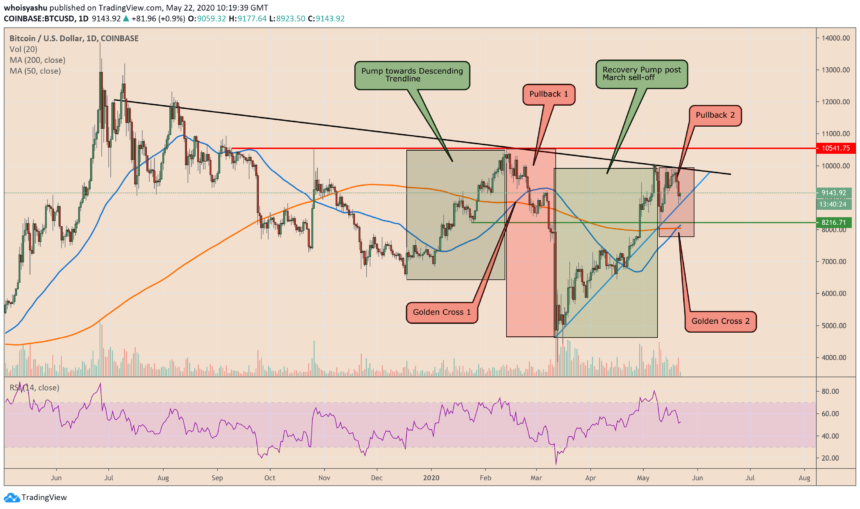 As shown in the chart above, Bitcoin’s recent price action looked identical to the February fractal. Here also, the cryptocurrency rallied from its bottom below $4,000 to close above $10,000. It then tested the same Descending Trendline for a breakout but failed. Later, the price corrected to the downside while painting a Golden Cross.

While bitcoin was maintaining strong support near $9,000, it now risks completing the Feb fractal with an extended downside correction towards 50-day moving average (blue), followed by a retest of the 200-day moving average. These levels are inside the $8,000-$8,100 price range as of May 22.

The correlation comes as Bitcoin searches for its position in the broader asset allocation spectrum. The cryptocurrency achieved some recognition as safe-haven as the global economies entered a recession, with billionaire investor Paul Tudor Jones and Renaissance Technologies’ flagship fund admitting to having dipped their toes in the 11-year old asset.

Prominent fund managers explored Bitcoin despite rubbishing it earlier for its extreme volatility. But after the Coronavirus pandemic caused almost every asset to go berserk – even Gold – bitcoin started to look like a part of the Wall Street club.

That came evident with the cryptocurrency’s positive correlation with the S&P 500 after they both suffered serious losses in March 2020.

Only recently, bitcoin decoupled itself from the U.S. benchmark and joined ranks with Gold. VanEck, a New York-based investment management firm, said in a note that both bitcoin and gold shared a low correlation long-term, but coronavirus sell-off somewhat triggered it. Excerpts:

Messari has added Huobi, OKEx, Liquid, Bithumb, and UPBit into the top 10 by volume