Bitcoin addresses with a non-zero balance are at an ATH, can Bitcoin market cap be projected to go to $ 100 trillion?

The most affluent Bitcoin wallet addresses: Not as many as you think

$BTC addresses with non-zero balances are at an all time high. What’s more surprising is that we are even higher than when we near $20,000. Hard to not be bullish on this kind of distribution and adoption. @glassnode pic.twitter.com/bNvt78C5rD

Also to note the number of addresses with more than 1 $BTC have continued to go up. There are lots more charts like this at https://t.co/4PBxBQ7S12 pic.twitter.com/ftNYzTOgS6

New wallet address increases rapidly when Halving is near

The number of unique users participating in the Bitcoin market is also reaching a record number. However, the number of wallet addresses with large balances is deficient.

Bitcoin has the potential to become the world’s standard value transfer tool and currently has only 28 million addresses with balances, suggesting that the investment aspect is still very imbalanced after more than a decade.

What is the logarithmic regression band? How will the market grow?

YouTube’s famous cryptocurrency analyst, Benjamin Cowen, looked at the logarithmic regression band for the total market cap of cryptocurrencies in his latest video. And based on his analysis, that total digital asset market capitalization could reach $ 10 trillion in the next price increase.

The logarithmic regression band is the range of values ​​that the cryptocurrency market tends to return to when it’s not in a bubble. The green stripe represents it in the chart below. This line forms smooth curve overtime when plotted on a logarithmic scale. At the peak of the 2017-2018 bubble/burst cycle, the total market capitalization of cryptocurrencies has reached almost $ 1 trillion. However, it has fallen back into the regression range and is currently at around $ 290 billion. 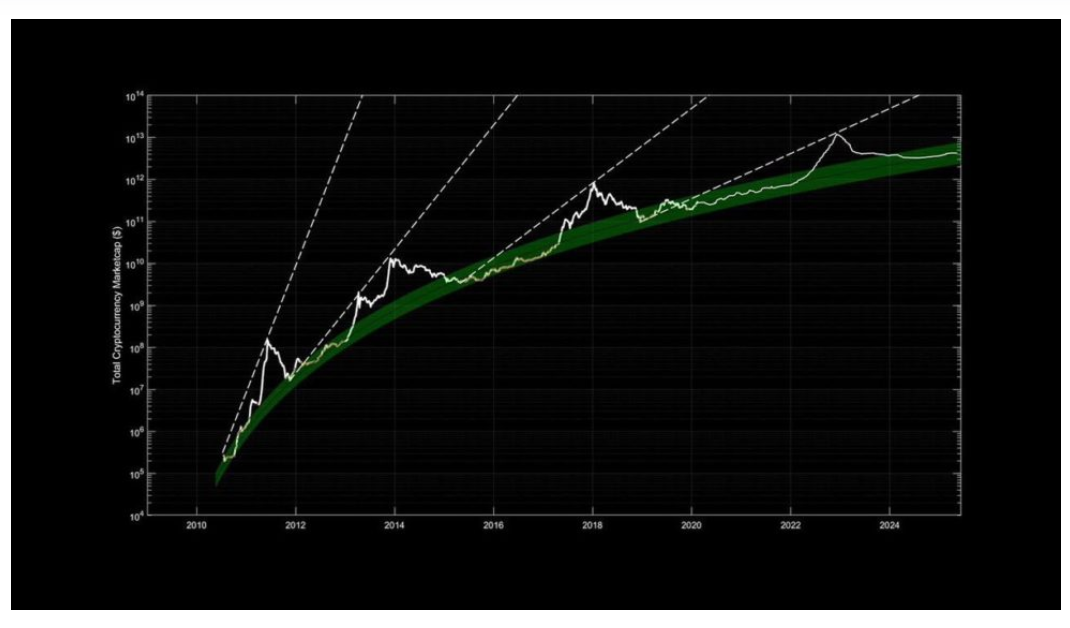 Plotting the difference between total market capitalization and the lowest point of the regression band over time shows that the highest level is becoming lower with each market cycle. This supports the theory of diminishing returns over time.

Assuming this behavior continues, we can predict a potential peak on the regression range for the next significant price increase. The likely outcome of this would be the total market capitalization of about 10 trillion dollars at the peak of the next bubble. In this scenario, the market cap is likely to fluctuate within the regression range for a while before starting to climb.

Will the Bitcoin market cap increase to 100 trillion dollars?

#Bitcoin aiming for 100trillionUSD (after 2028)?!
All physical commodities are nicely lined up on the stock-to-flow / market value grid. I added diamonds (S2F19, market value $1.5trn). Bitcoin seems to grow towards the 1 free spot on the S2F periodic table 🚀 pic.twitter.com/OZdEz72U8E

Of course, Bitcoin $ 100 trillion still has some difficulties in the future. The projected price increases in the S2F model happen because of the artificial limiting of supply over time. The next Halving will happen in May this year.

However, the $ 100 trillion predictions will not happen until the second half later, or sometimes by 2028. So now, the $ 10 trillion market capitalization in 2022 is what important/

At the current levels of Bitcoin dominance, the total market capitalization of $ 10 trillion for BTC is about $ 330,000, so that’s something to look forward to.