Binance Smart Chain DeFi protocol PancakeBunny has been exploited via a flash-loan attack, with more than $300 million being draine

Binance Smart Chain DeFi protocol PancakeBunny has been exploited via a flash-loan attack, in what the community initially believed to be a record-setting $1 billion loss. The price of the protocol’s BUNNY token dropped to virtually zero in the attack, now sitting at a 95% drawdown. The damage this time amounted to more than $300 million.

Our project has suffered a flash loan attack from an outside exploiter.

We will be posting a post mortem, in depth analysis, but for the time being we would like to update the community as to how this happened.

PancakeBunny is a DeFi yield farming aggregator and optimizer on Binance Smart Chain (BSC). It enables users to maximize their interest-earning on their crypto assets through yield optimization strategies, focused on prominent BSC tokens.

This protocol was subjected to a quick loan attack from an external actor. The attacker borrowed a huge amount of Binance Coin (BNB) before manipulating the asset’s price and dumping it on the platform’s BUNNY/BNB market. The attack saw the BUNNY price rapidly pump from $150 to $240 before plummeting to $0 in just 30 minutes. At the moment, the average price of BUNNY is still hovering around $95, down 45% over the past 24 hours.

4⃣ The hacker then dumped all the bunny in the market, causing the bunny price to plummet

Despite the rumors circulating that the attacker made off with $1 billion worth of tokens, it appears that the mechanics of the exploit were confused for the actual proceeds of the attack. Sources calculate the real losses to be around just $50 million. None of the vaults on the platform were compromised. On the other hand, about $110 million worth of value has disappeared from the BUNNY token’s market cap, leaving a big hole in the pockets of investors. BUNNY/BNB was the only group to be wiped out by hackers, with hackers earning 697,000 BUNNY and $114,000 BNB. 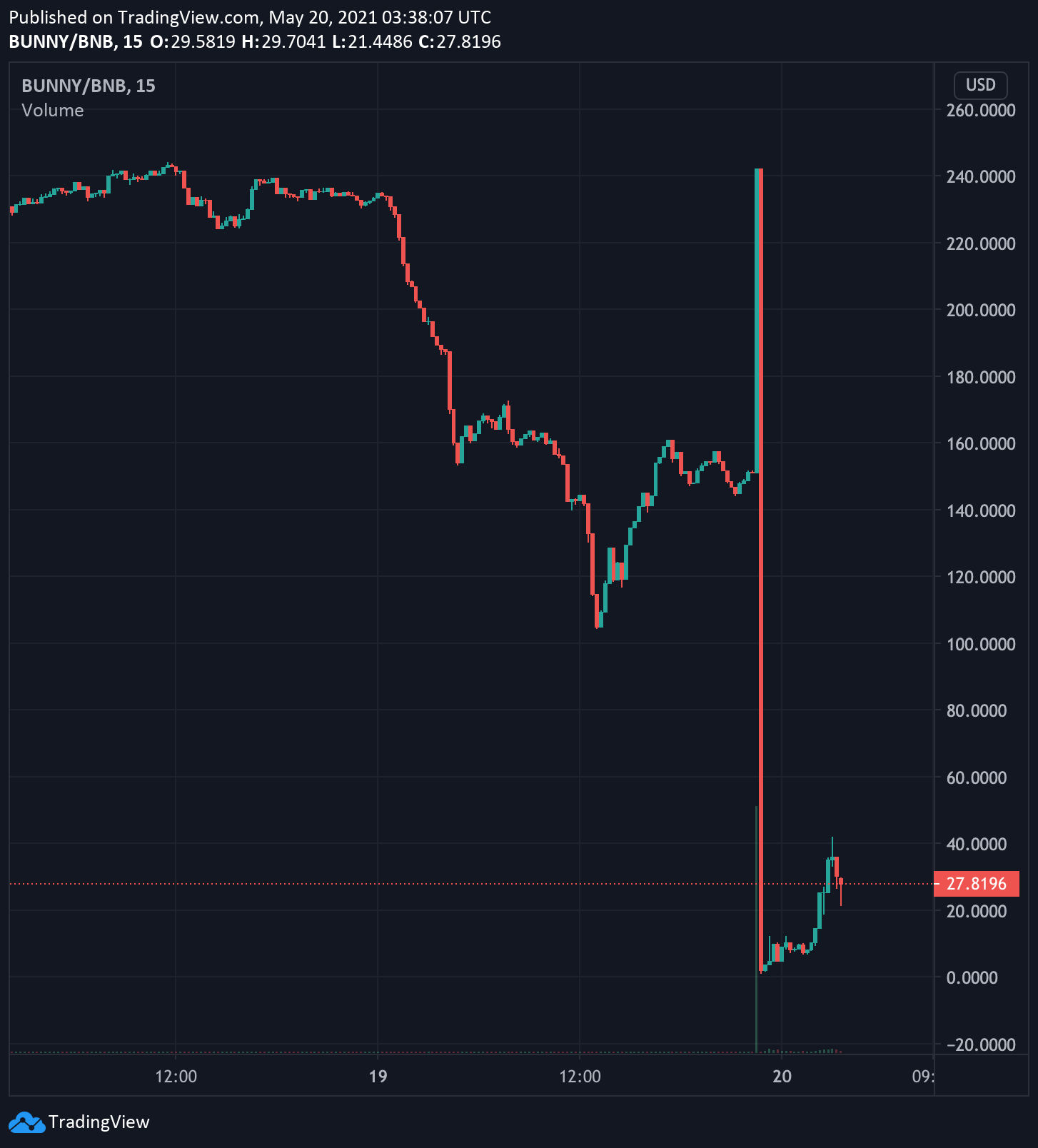 To add insult to injury, the attacker topped off the attack by leaving a rabbit-related pun as a note on the transaction that read “Aren’t Flashloans Earitating”. All funds borrowed to execute the attack were returned via Pancakeswap.

As the hack wreaked havoc on one of Binance Smart Chain’s flagship projects – with Bunny representing over $1 billion in total value locked up prior to the hack, viewers are discussing whether Binance can move to fix the problem or not.

The Pancake Bunny team has temporarily disabled deposits into the protocol and has stated that they are working on a reimbursement plan for affected users. An official post-mortem report will also be released soon.

In April, crypto data aggregator Messari reported that instant loans have become the most common means of attack in the DeFi ecosystem, accounting for about half of the $285 million total. DeFi mining identified as of 2019.

Bank of America Fund Manager Survey: The most crowded trade is “long Bitcoin”, the cryptocurrency is in a bubble zone