Altcoin Daily founder and trader Austin Arnold is wrapping the top six events that are happening in the cryptocurrency space in March 2021.

First up on Arnold’s list is the report that JPMorgan sent its private clients on crypto. The report was produced in February 2021 and has been distributed to clients of JPMorgan Private Bank, which requires a minimum balance of $10 million to open an account.

“This is interesting because it’s not like JPMorgan sent out a private document to all of its customers. They specifically sent educational documents on cryptocurrency to their high net individuals people that belonged to their private bank”.

“This really grinds my gears! Last month, they’re telling the mainstream media the public that demand isn’t there, our customers don’t care about this information yet they’re sending this information to high net worth individual”.

The trader cites three different metrics that JPMorgan applied to determine the value of Bitcoin (BTC), including Metcalf’s law, the current value of gold, and the global value of money. He also believes that Bitcoin’s adoption is very similar to internet adoption in which it is exponential growth. 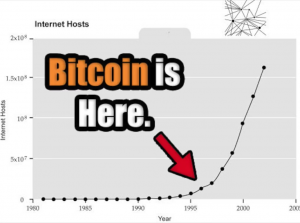 “I think we’re gonna see a whole lot more users onboarded to Bitcoin in the next few years”.

Next on Arnold’s list is Polkadot‘s partnership with UC Berkeley.

On 4th March,  the University of California, Berkeley ‘Blockchain Xcelerator,’ and Parity Technologies announced a collaboration in the development of the University’s blockchain curriculum

“I think this is a super-smart play by Polkadot. They are educating the next generation of innovators on how to use blockchain, specifically the Polkadot blockchain. Polkadot is clearly playing the long game here”.

Crypto KOL’s third pick is the announcement that “Cardano (ADA) is now 90% decentralized! With an ETA of 100% decentralization on March 31st”.

“The increase in decentralized stake pools making new blocks means more pools that have made new blocks will be able to share the staking rewards to users that have delegated to them”, Arnold adds.

Fourth on the list is the blockchain platform Enjin looking to tackle issues of scaling and interoperability against the backdrop of soaring “gas” fees on the Ethereum network.

“This will allow users to choose if they want free transactions on JumpNet or trustlessness on Ethereum and Efinity. Such great news!”

Second-to-last, Arnold cites Chainlink‘s recent announcement about their client upgrade, Off-Chain Reporting (OCR) which provides efficiency improvements to how data is processed and moved across Chainlink oracles, resulting in a ~90% reduction in oracle operating cost.

“With this upgrade, DeFi users will have a 10x increase in the amount of data that can be put into their smart contracts, broadening the surface area of DeFi.”

The last news on the crypto KOL’s list is Paid Network’s attack.

Paid Network, a DeFi platform aimed at real-world businesses, has been exploited today in an “infinite mint” attack that has sent PAID token prices plunging upwards of 85%.

“The attacker’s wallet still has over 57 million PAID tokens worth $37 million”.