In the recent video, analyst Elliot Wainman from EllioTrades crypto reveals the list of coins that set to go parabolic with massive gains as the crypto market is moving into the 2nd quarter of the most bullish year in crypto history.

“This is the year with extremely prosperous and fertile grounds for gains across a very specific subset of coins”, the trade says. 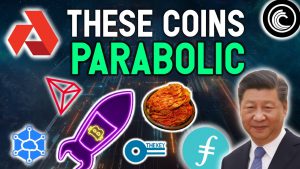 Filecoin (FIL) is the featured coin of the video. Filecoin is a decentralized storage system that aims to “store humanity’s most important information”.

Filecoin is an open protocol and backed by a blockchain that records commitments made by the network’s participants, with transactions made using FIL, the blockchain’s native currency. The blockchain is based on both proof-of-replication and proof-of-spacetime.

The trader then explains the rationale behind the rally of this coin:

“There’s been some various fundamental news such as being listed on Coinbase as well as getting added to Grayscale Investments, and these are all amazing pieces of news”.

However, the trader notes that “it is not the trend that we’re talking about today. The trend goes much deeper than that!”.

“Filecoin is booming in China, especially on crypto exchange Huobi, where Filecoin trading activity using the Chinese yuan is higher over the past few days than yuan trades into Ethereum or Bitcoin”.

China is crazy for Filecoin, with a 24h increase of more than 30%, reaching a maximum of $236. The 24h trading volume of FIL in Huobi, China's largest exchange, reached $24.2b, nearly three times the volume of the second ETH $8.8b, Bitcoin was $7.8b. pic.twitter.com/LbKlTkfBqt

Wainman then adds that major Chinese companies have been getting into Filecoin mining too, including Xinyuan, which invested nearly $100 million in Filecoin miners, and Ninth City, which is publicly traded on the Nasdaq (NCTY) and has spent $12 million since February on Filecoin mining partnerships.

“Not to mention, Chinese retail investors are gobbling up FIL too, pumping it on social media apps like WeChat. It has gone fully mainstream there”, he says.

In addition, the crypto KOL further explains the fundamental tokenomics behind Filecoin that helps it gains this massive explosion:

“Unlike with Bitcoin mining, Filecoin miners must buy FIL in order to mine more of it, which means new miners are always buying FIL to get starting capital”.

These coins are warming up

In the second part of the video, analyst Elliot Wainman lists out the potential altcoins that are ready to join the parabolic rally.

The first coin on the list is BitTorrent (BTT). At the time of the video, the coin “has been on an absolute terror up almost 900% on the last 30-day period”.

Tron (TRON), the Chinese coin, is also on Wainman’s radar.

“Tron has not really moved too much over the last few years. It has been a very slow mover but you can see it’s starting to really pick up now for the first time in literally years, getting over that 10 cent mark just a few days ago. Now it’s comfortably hanging out here at about 13 cents. This is an indication that some of these 2017 sleeping giants like Tron might be re-awakening”.

Third on the list is Thekey (TKY), a smaller Chinese project that was heavily connected to Chinese officials.

“Chinese projects starting to pump. The embrace of decentralized storage in China and together, it gives you a lot of clues as to what might be pumping next”, the trader says.

Akash Network with its token AKT is a new project on the crypto KOL’s radar. Akash is the world’s first decentralized cloud computing marketplace, and the DeCloud for DeFi.

“Censorship-resistant, permission-less, and self-sovereign, Akash DeCloud is a faster, more efficient, and lower cost cloud built for DeFi, decentralized projects, and high growth companies, providing unprecedented scale, flexibility, and price performance. Up to 10x lower in cost, their serverless computing platform is compatible with all cloud providers and all applications that run on the cloud”, the trader highlights.

“I believe right now, just as when I found them around 60 cents that they are a huge disrupter in the space and they are set for a massive year”.

XRP price going for a 3-year high, almost 210 million token has been transferred by some exchanges that delisted it in January