The divergence in capital flowing between Bitcoin & Altcoin caused BTC dominance to soar to 70%, Altcoin season coming or a doom?

After many observations of the Bitcoin season, it is possible to draw out two prerequisites to help people realize whether the Altcoin season has come or not, that is Bitcoin Dominance must decrease and the cash flow must shift to Altcoin. And maybe the time to come is the right time for a perfect Altcoin season. 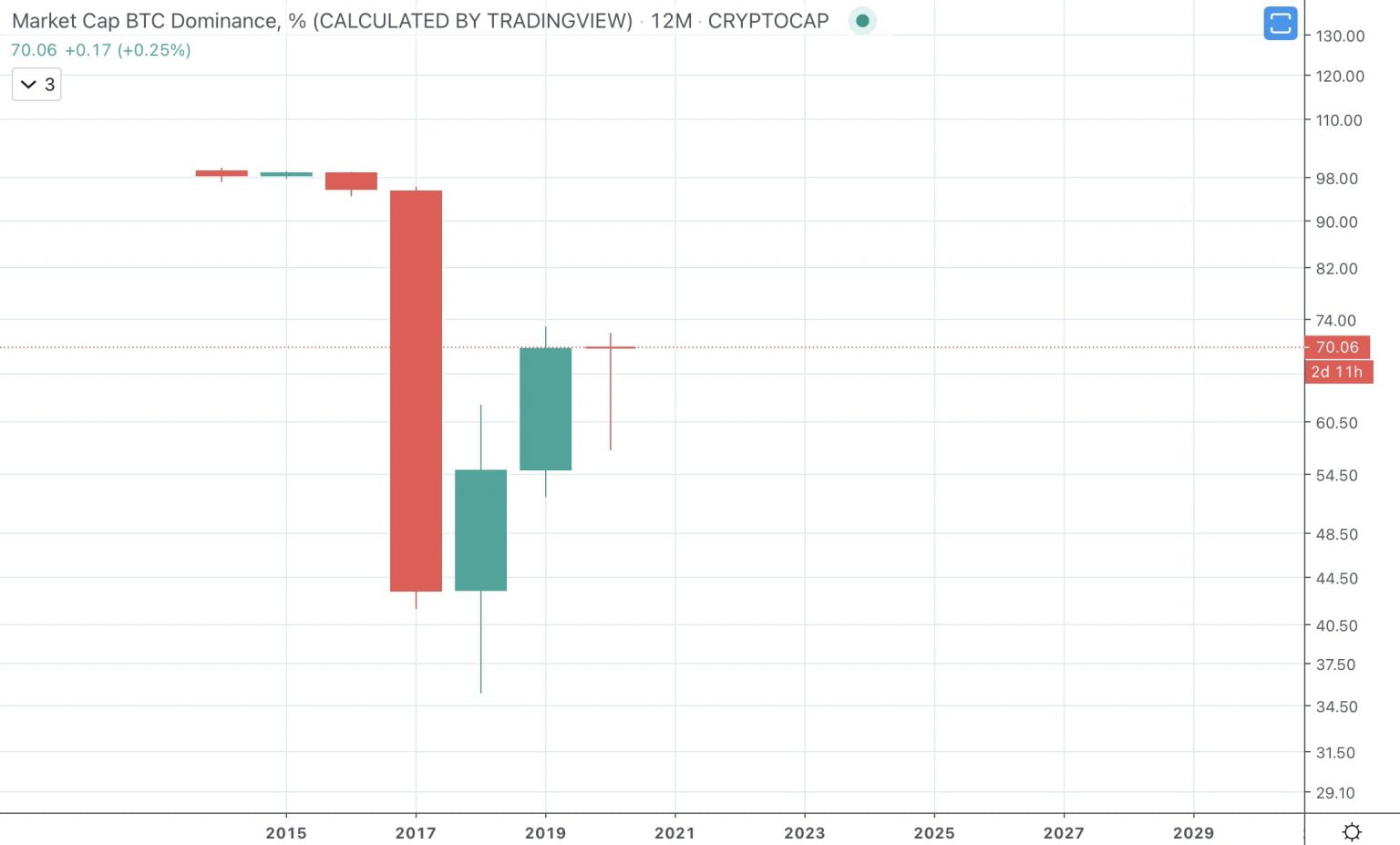 A red Doji could be left behind on the 2020 BTC dominance chart | Source: TradingView

What is the Altcoin season?

Altcoin season or Altcoin season refers to the period of time when altcoins simultaneously increased sharply with profits x2, x3, even x10 times in a few weeks. The most typical is the Altcoin season in September 2017, when everyone closed their eyes to buy an altcoin, any assets of everyone increased very quickly after that.

Although investor sentiment remains optimistic and capital from major financial institutions continues to pour into Bitcoin, the rule of thumb when the market rises too quickly leads to strong corrections. Bitcoin is no exception. At the moment, Bitcoin is no longer holding above $ 28,000.

Bitcoin is showing signs of the beginning of the bull season, analysts say. That’s when Bitcoin overcame all-time highs and set new price highs consecutively. During the growth process, despite much bad news affecting the market such as the bill of stablecoins, the price of Bitcoin continued to rise and was almost less affected. Many investors predict that Bitcoin’s capitalization will soon reach 10% of the gold market when it will rise to the level of $ 50,000.

However, many experts are still concerned about the unsustainable rise of Bitcoin due to speculation and fear of missing opportunities (FOMO).

“More and more people are putting their faith in Bitcoin. But Bitcoin is still a risky and volatile holding. It can suddenly drop 20-50% in value at any time. “.

Although the growth gap between Bitcoin and the rest of the cryptocurrency market is still enormous, it’s undeniable thanks to the influence of Bitcoin that has stimulated the growth of altcoins to make their activities become. a lot more bustling than in previous weeks.

Now is a great time to be investing in the Altcoin space, in specific projects that everyone expects will perform well. Altcoins are highly speculative, they can lose 10% of their value one day and gain 40% the next. This is due to the illiquid nature of the market. As an Altcoin grows in price, the price stabilizes and the market becomes easier to predict and trade. In the early days for most projects, this is when they are at their most volatile. Similar to an IPO listing on the stock market, most of the price action occurs within the first week of trading before it stabilizes.

In a series of tweets, the Real Vision CEO says he finds it ludicrous when people consider all other cryptocurrencies as a scam simply because they are not Bitcoin.

“It is like taking a snapshot of early VC bets and writing everything off as zero because it’s not Google. Apples and oranges. The actual money is in the numbers game – Pareto’s Law. Tokens are just real-time trading VC bets. If you owned early seed investments with real-time mark to market you’d see the exact same. 80% go to zero, 19% add value and 1% make all the money. Real-time marks freak people out.”

Pal says he understands why many investors stick to major crypto assets. He is currently invested in BTC and Ethereum, and says he plans to diversify his crypto portfolio to include riskier bets:

I’ll write this up when I get time as its so important.

In another development, according to top industry analysts in the know, the SEC is sniffing around other altcoin projects and companies and could continue to take shots at the industry throughout the new year.

Swipe Wallet, Bittrex and Ziglu will be delisting XRP, Wirex will not include XRP in a US version of the app