The massive movement of crypto collateral has favored Maker as it takes the top spot with a market dominance of 18%. The second-largest Wrapped Bitcoin with TVL just over $ 2 billion while Uniswap just dropped to third place. UNI prices are still holding steady, unchanged for the day at $ 3.75, as they are still undelivered.

Uniswap is hemorrhaging collateral today as November 17 marks the last day of a liquidity mining program. In less than 24 hours, more than $ 1 billion, or 40% of its liquidity, caused the protocol to fall to third place in the TVL rankings. 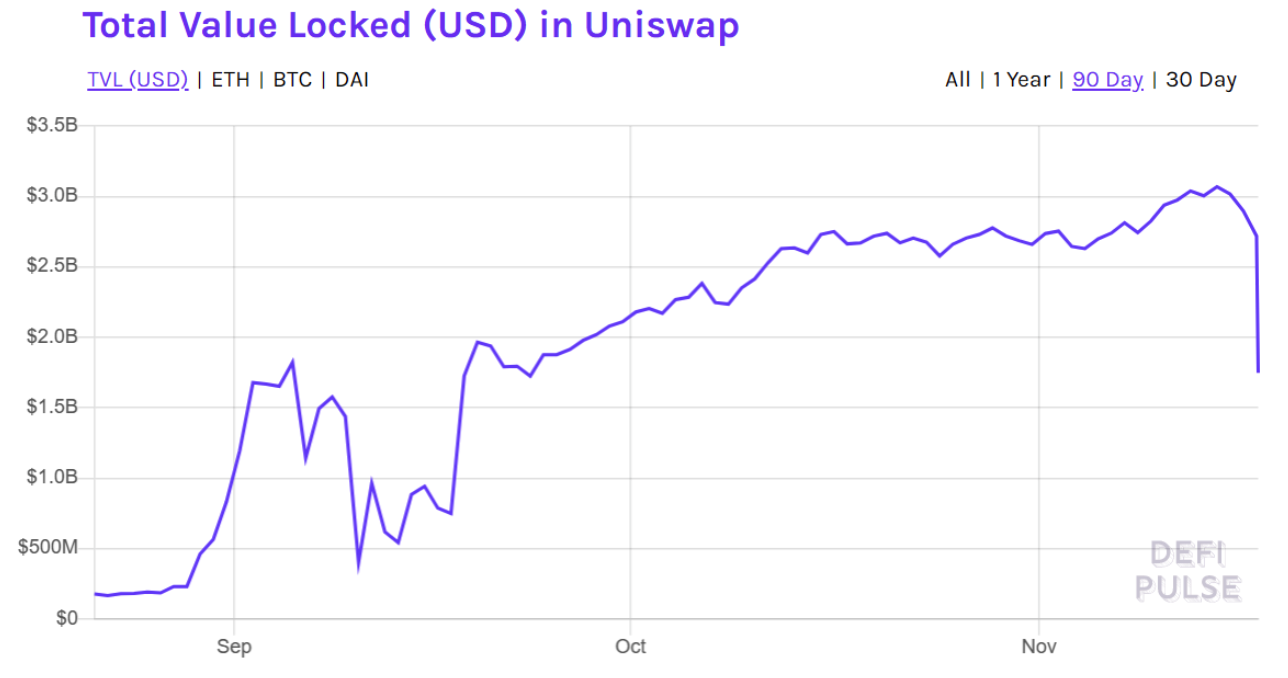 Suppose the Uniswap board doesn’t hold a vote on the future of farming before the pools expire. These funds are rapidly depleting as collateral is moved away and from nearly $ 2.5 billion held, they have now dropped to just $ 960 million. According to Defipulse, over 1.3 million ETH worth an estimated $ 600 million have left the protocol at today’s prices. Ethereum price is holding steady at press time around $ 465, so they haven’t been sold yet.

A ‘temperature check’ poll was set up to assess whether the community would like to receive their token distribution or continue to farm UNI in a belated response to the inevitable migration.

At press time, the two whale addresses have pledged nearly 30K UNI between them to shake the vote to ‘yay’ for the proposal, meaning that the liquidity farming will continue when it exists.

The goal of this proposal is to ‘maintain the status quo’, using reduced incentives as a means to continue distribution as we look to optimize allocations in the medium term.

Temperature check on ‘Should we distribute UNI to LPs’ ⏬https://t.co/HlSAybYfr2

If the proposal is successful, there is a second proposal to extend the farming incentive for another two months but at half the current distribution rate.

It added that the expedited poll would take place in 3 days, and if it passed with a minimum of 25,000 UNI backing, the proposal would move on to a consensus check.

Again the story of those who regretted the Bitcoin price rise. Specifically, according to South Wales Argus, James…
Loading ... Load More Posts No More Posts