All five BitClub Network are in custody but the unsealed indictments

As AZCoin News reported, on Sunday last week, Indonesian authorities cooperated with the FBI to arrest Medlin. He has been accused of being a pedophile, having fled since December 2019. Even this arrest has been labeled red notice of Interpol.

With Medlin’s arrest came the unsealing of the indictments, which today we cant examining as initially filed. The five BitClub Network indicted in the case is Matthew Brent Goettsche, Russ Albert Medlin, Jobadiah Sinclair Weeks, Joseph Frank Abel, and Silviu Catalin Balaci. The indictment accuses Goettsche, Medlin, and Balaci of creating the BitClub Network. Weeks and Abel are cited as promoters. 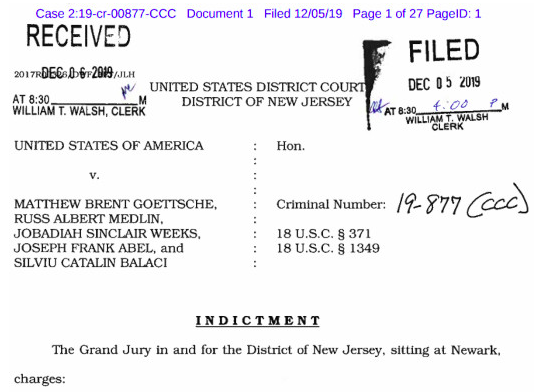 “BitClub Network was a worldwide fraudulent scheme that solicited money from investors in exchange for shares of pooled investments in cryptocurrency mining and that rewarded existing Investors for recruiting new investors.”

The indictment charges that Goettsche, Medlin, Weeks, and Balaci were engaged in a conspiracy to enrich themselves by soliciting and causing others to solicit investments in BCN through materially false and fraudulent pretenses, representations, promises, and omissions.

“The defendants discussed and understood that BCN’s purported cryptocurrency mining would not be profitable, but would serve to induce investors to purchase BCN memberships and shares in BCN’s purported mining pools.”

Through the BitClub Network, the defendants defrauded at least $ 722 million from investors. Elsewhere, Medlin and Abel were also accused of committing securities fraud.

That same month, Medlin emailed the article to Abel.

All up the indictment lays two counts against the BitClub Network defendants:

Assets cited in the indictment include

At press time, all five members of BitClub Network are being detained in the United States or abroad. And the court has not yet made an official decision on their punishments. Except for Medlin, if convicted in Indonesia, he will face a fifteen-year prison sentence.

In this next cycle, DeFi will likely help push ETH price to $1 trillion CoinMarketCap?

Market Analyst at an FSA Japan: XRP is losing its charm in Japan but no idea whenever XRP will ever reclaim its throne