After the lawsuit with SEC, XRP price will return to $3?

Amid the gloom, the XRP price is no exception. The altcoin has, however, experienced phases of explosion during previous bear markets. Precisely at times when the rest of the market was in free fall. For what reasons? The company never stops growing, even during its lawsuits with the SEC, even in the bear market.

A difficult cycle for Ripple and XRP

XRP, created by Brad Garlinghouse in 2012, has not had a very easy market cycle. In 2017, however, it was one of the big stars. The gains made by investors were by far the largest in the market. The 2017 bullrun was a simpler time, no Shiba Inu (SHIB). The token had gone beyond $3 on January 2, 2018, marking the Bitcoin bubble’s apotheosis and the start of the most violent correction of the decade.

Many investors are buying at current levels. From $0.16 to $0.32, XRP is in almost infallible support zones. This is the zone it occupied during 2017 before taking off in stages, $1, $2, and $3.34. The market remembers these targets, but also these strong support areas. That’s all it takes to find strong buying volumes as soon as we approach them.

However, in 2021, the situation seems to have changed. Brad Garlinghouse and Ripple are at the heart of the first lawsuit between the SEC and a crypto company. A case that will undoubtedly set a precedent! Therefore, all eyes in the sector are riveted on the case, and Garlinghouse has no room for error. The price of Ripple followed its bull run, according to the SEC’s announcements and the lawsuit’s evolutions.

Instead of picking up its old ATH above $3, XRP reached “only” $1.99, leaving a bitter taste in investors’ wallets. It was April 13, 2021. And while the rest of the market experienced a final bullish wave in early November, XRP was caught in a compression triangle, a chart pattern that led to a return to the support zone. 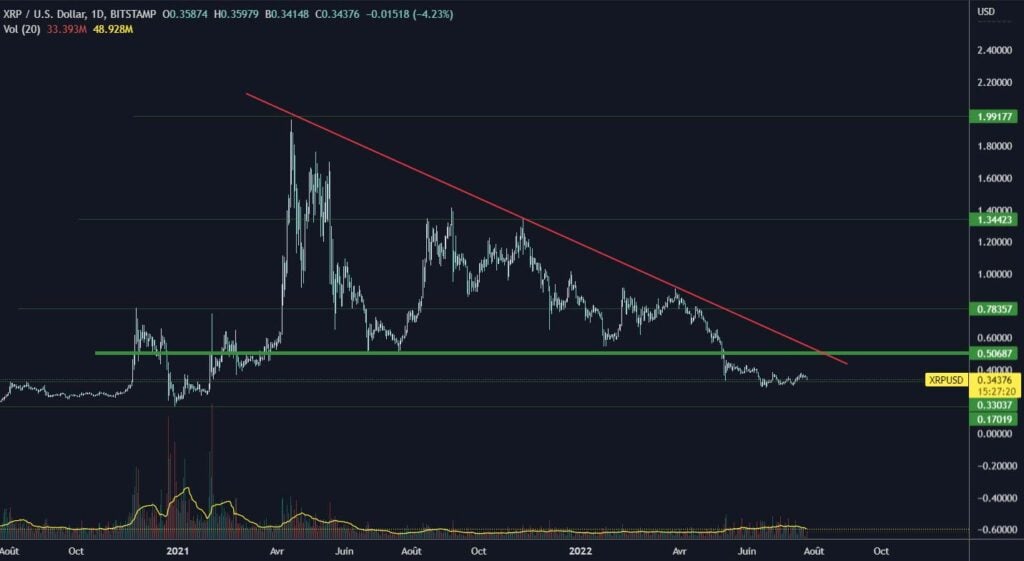 In 2021, XRP got stuck in a chartist triangle that opened from below

But the graph above shows another interesting element. The volume can increase significantly as the price breaks below $0.5, marked in green. Even if the market seems to lose interest in this corner, the hodlers are still present. XRP is one of the best projects in blockchain and crypto. The company is expanding widely all over the world, especially in the Arabian Peninsula. The company chained partnerships even though it was in the middle of a trial. Instant and Cost-Effective Money Transfer service is now a real competitor to SWIFT. No crypto and blockchain company has achieved its goals so closely and could not be able to replace a giant like SWIFT truly.

The only thing holding XRP from exploding and catching up on its backlog in 2021 is the lawsuit with the SEC. But this trial seems to be coming to an end. Whatever the outcome, the judges’ decision will have an extremely violent impact on cryptocurrency charts.