At press time, the ADA price had dropped a bit from the high of $ 0.081 a few hours ago. This is the highest landmark of ADA since July 2019 – the time when ADA is near the end of a downtrend lasting for more than a year. With this high, ADA statistics have increased by 52% in the previous week. 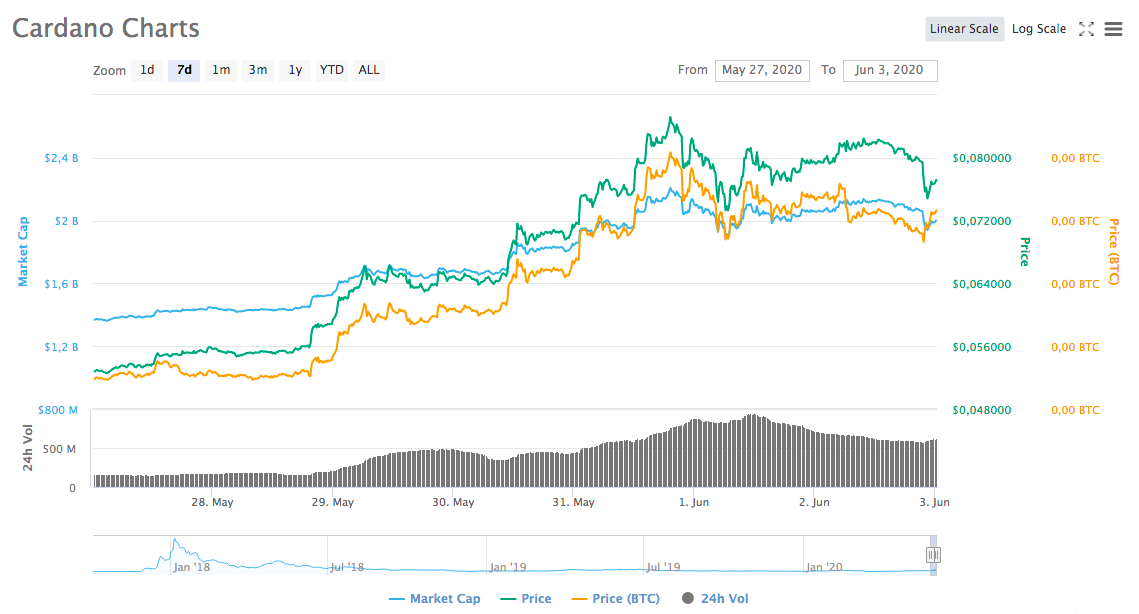 ADA price increased by over 50% during the week, why has ADA price soared?

ADA price increased by over 50% during the week, only one step away from entering the top 10 of CoinMarketCap

ADA prices have reached a new record since mid-March this year, up from a low of 2020 of $ 0.02 up to its current value of $ 0.07. This is one of the most critical recovery events of any significant cryptocurrency this year.

According to statistics from CoinMarketCap, ADA price is currently up 52% ​​last week, eclipsing the increase from 10% – 25% compared to the top 10 highest markets capitalized cryptocurrencies in the market. This increase also helps ADA quickly rise in the CoinMarketCap rankings, from 15th rank in mid-March to become the 11th largest cryptocurrency today. ADA currently has a market capitalization of more than $ 2.1 billion and is only short of $ 100 million when knocking Tezos (XTZ) away from its 10th place.

Unlike many price protests, this seems to have a clear cause.

Last week, IOHK co-founder and CEO Charles Hoskinson finally revealed the expected launch date of mainnet Cardano Shelley. The new update, which IOHK has been developing for about two years, will introduce a series of changes to how Cardano works and will bring block authentication control to the community. It will also allow betting wagers, allowing ADA owners to contribute their balances to earn rewards from the network.

Cardano is intensifying its cooperation over the past few years, and does this boost ADA prices?

On the other side of the Atlantic, the Cardano Foundation is working with the International Association of Trusted Blockchain Applications (INATBA 1), close to the European Commission, to bring together developers and distributed ledger technology projects with regulators and policymakers to the future-proof blockchain.

Meanwhile, earlier this year, the Cardano Foundation, together with the fellow BC4EU members, submitted a proposal for a regulation on the EU’s framework for crypto assets. A harmonized approach at the EU level will bring much-needed legal clarity for the blockchain industry and its users, given the Union’s financial services regulations do not explicitly cover crypto assets.

The report from Cardano forum stated:

“Thus, any classification of crypto assets should be technology-neutral and based on their functions and features. This is the first step of its kind to have a common approach to crypto-assets.”

In addition to era, the Cardano Foundation, together with the Algorithmic Contract Types Unified Standards (ACTUS), is creating a standard framework for smart contracts in finance.

“As the global economy will start to recover from Covid-19’s consequences, we hope for blockchain to become an empowerment vehicle for small, medium, and large enterprises alike amid a maturing blockchain industry. This will exponentially increase the necessity but also the political will to develop robust blockchain legislation.”

Also recently, AZCoin News reported a lot about Africa-related events and their developments in the cryptocurrency sector.

And Cardano did not ignore this market. Last year, the Cardano Foundation began laying the groundwork to be at the forefront of shaping blockchain-enabled sustainable growth in Africa 1 by advising on building governance policies. Robust legislation will help the region’s countries to boost their fintech efforts and increase their attractiveness.

“It is key to work with policymakers, regulators, and politicians to increase our collective success and ensure widespread adoption. The Cardano Foundation supports the entire industry and this revolutionary technology. Our mission then is to help blockchain reach its full potential as demand for blockchain-enabled solutions continues to grow.”

With all these developments, we can fully hope for a brighter future of ADA prices in the upcoming gain.

With the ongoing rollout of the Shelley mainnet, ADA…

Cardano Shelley upgrade has begun and Cardano price is…

The biggest upgrade to the Cardano is due to begin…

The biggest lie in the cryptocurrency market is that…

As Ethereum continually delayed Ethereum 2.0, the…