Bitcoin suddenly fell by 3% within hours alongside stocks as the outcome of the U.S. election still up in the air

Some crypto whale watchers have spotted this massive transaction. Apparently, someone transferred about 7,749 Bitcoin, worth $ 104,344,025 for a fee of around $ 9.

The whale moved Bitcoin to two separate addresses, the majority sent to a wallet with no previous transaction. 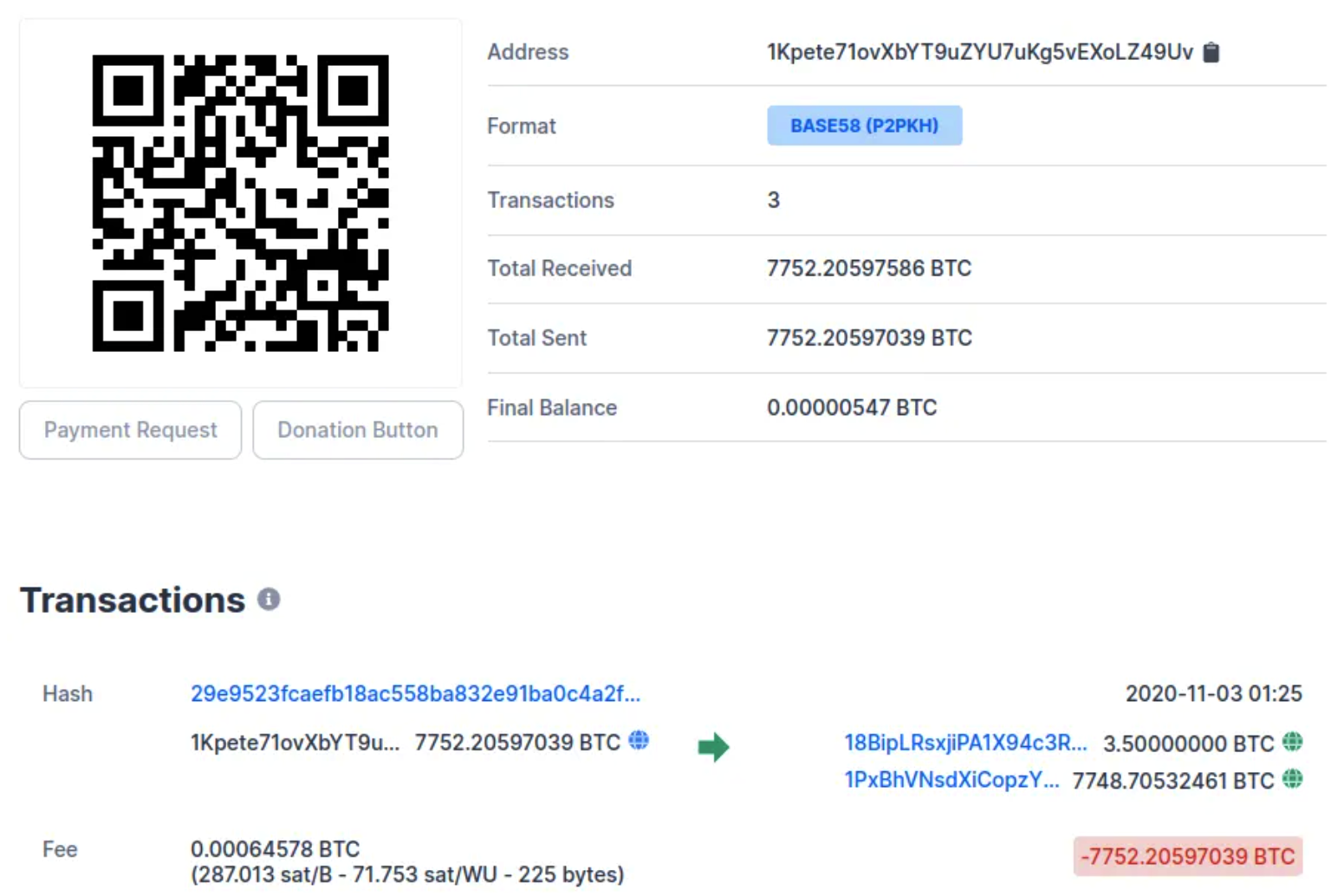 According to BitInfoCharts, the sending address was the 245th largest Bitcoin wallet ahead of the transaction on Tuesday. There are no known addresses involved with a connection to crypto exchanges, which suggests that the owners of BTC may be transferring money for security purposes.

Accordingly, Whale Alert said someone transferred 69,369 BTC – the equivalent of $ 1 billion – into an unknown wallet. Accordingly, analyst firm Elliptic said that the transaction is highly likely related to Silk Road.

The Bitcoin address that sent the transaction is a famous one. As Elliptic notes, it was the fourth-largest wallet before a large chunk of its coins went on the move. However, is it particularly notorious for con high-profile cybercriminals who have been attempting to crack its encryption.

Ripple, which owns more than half of the total XRP supply, sent 1 billion XRP from two escrow wallets to three Ripple-owned funding wallets. Ripple has set up an escrow program that allows it to regularly access its 1 billion XRP per month, allowing it to sell some of its crypto assets to institutions and third parties.

The company says it continues to use its XRP holdings to boost its remittance platform, Liquidity on Demand, but it has stopped selling XRP on the open market.

BTC price suddenly fell by 3% within hours alongside stocks as the outcome of the U.S. election still up in the air

BTC price unexpectedly dropped 3% within hours on November 4 to $ 13,566 after briefly rising above $ 14,000. Coincidentally, the US dollar, gold, and stocks all fell in value. 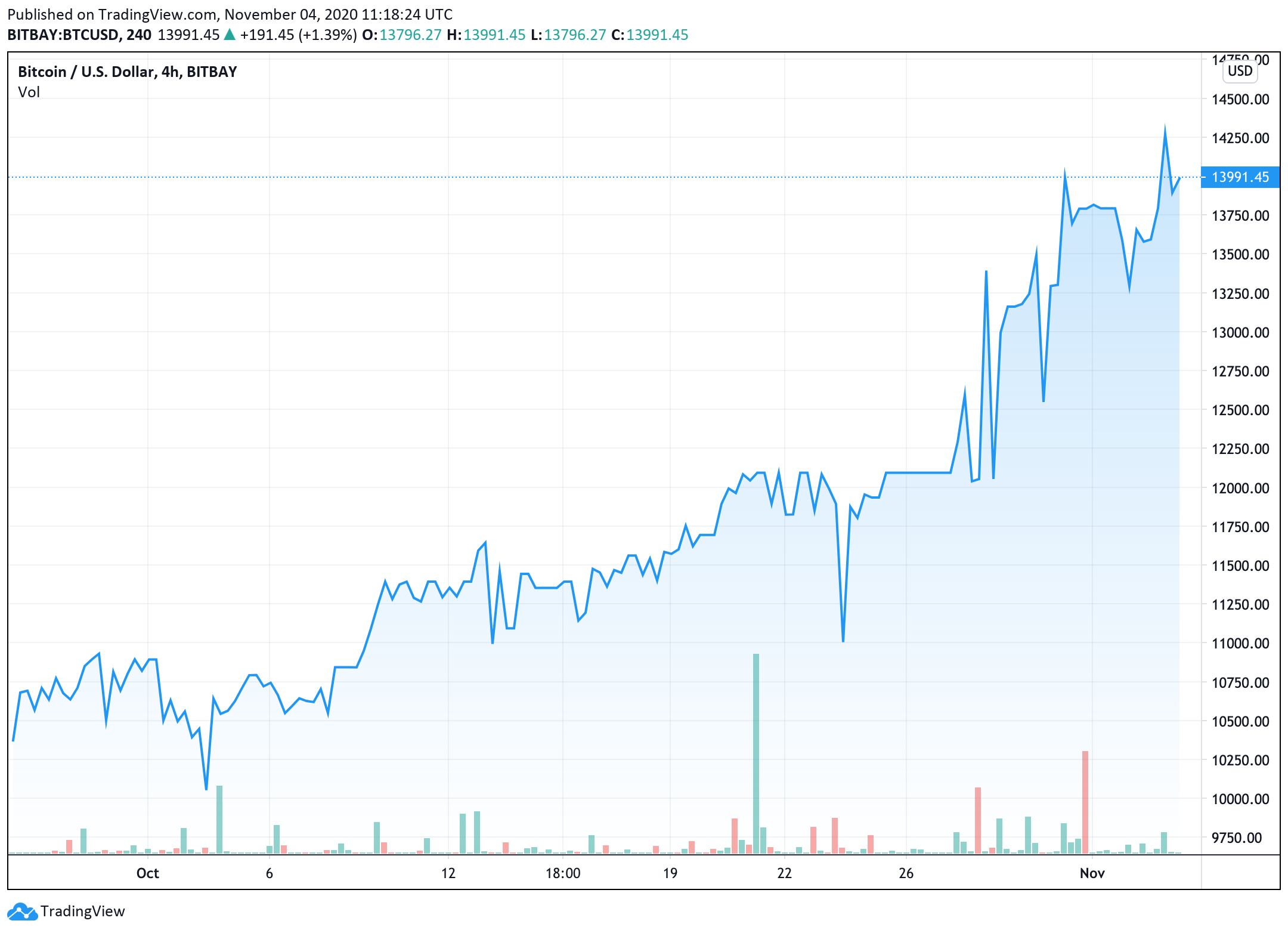 Analysts are pointing to the uncertainty surrounding the election as the catalyst for a strong correction.

As the mainstream media actively reported on the vote count, the price of Bitcoin and stocks rose. However, after the vote count ended the day, all risky and risky assets were in the red, including the S&P 500 futures.

Tracy Alloway, a financial journalist at Bloomberg and co-chair of the podcast Odd Lots, said this was a possible outcome due to the statement by President Donald Trump.

“S&P 500 futures like Trump’s suggestion that he’ll go to the supreme court to challenge election results. Now in the red.”

BTC’s recent drop is noteworthy as it falls in parallel with the dollar. Usually, when the dollar falls, Bitcoin and gold tend to increase in value, as both value stores are priced against the dollar.

In the short term, with BTC being repeatedly rejected at $ 14,000, traders are leaning toward the market’s slump.

There are several major levels of support soon for BTC. First, the $ 13,300 zone has been heavily guarded for the past week. If BTC continues to hover above $ 13,300, that shows the possibility of a rebound from the buyers.

Second, $ 13,000 has been supported with whale clusters since the start of November. This means whales have accumulated a large amount of BTC at that level, making it a viable field for interested buyers.

An ETH2.0 deposit contract has been launched on GitHub but no official announcement, was it by the US Elections?

Ethereum 2.0 deposit contract has just been released on Github, with Genesis time set at Dec 1, 2020