Price increases will certainly decrease. At press time, Bitcoin price has plunged more than 10% in the past 24 hours, losing support at $ 30,000, giving way to a rapid retreat with a total value of thousands of dollars. This is a $ 4,000 discount in just 60 minutes. 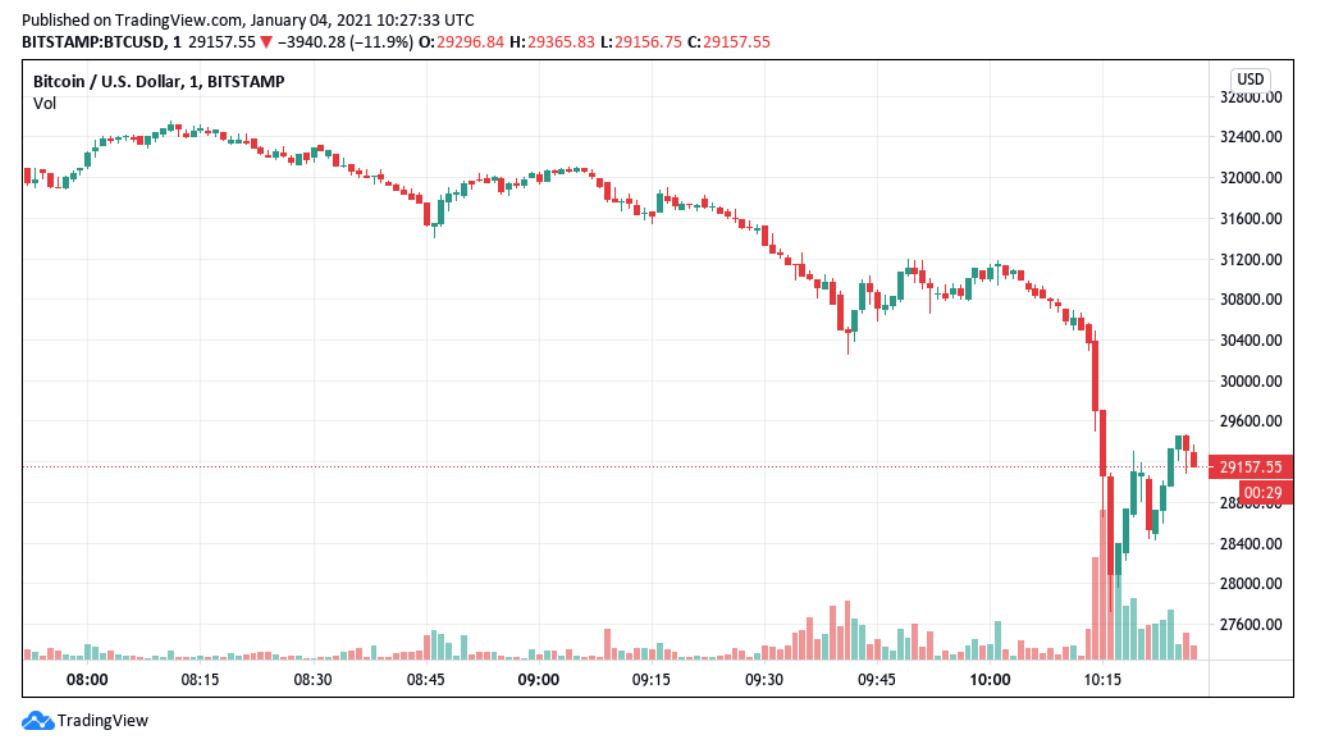 Bitcoin price has dropped more than 12% in just one hour

The data shows that exchange activity is on the rise, with the inflow of Bitcoin increasing significantly the day after traders withdrew money last week. Those things have brought Bitcoin in line with short-term predictions from analyst Michaël van de Poppe.

Statistician Willy Woo was not confused about a substantial price drop on Sunday, arguing that just one bizarre incident could send Bitcoin to $ 24,000. $ 27,700 meanwhile filled the void created on the CME Bitcoin futures market over the weekend, a classic move that has been absent from past weeks.

The CEO of financial consulting firm deVere Group sold 50% of his Bitcoin holdings when the price rose to record highs.

In a blog post over the weekend, Green said:

“As Bitcoin hit over $34,000, I made the decision to sell half my holdings. It’s better to sell high and re-buy in the dips. The steady gains in the price of Bitcoin have made the digital currency the top-performing asset of 2020, up over 200%. As such, I felt the time was right for profit-taking.”

According to Green, his decision to sell was not due to a lack of trust in Bitcoin, or the concept of cryptocurrency:

“I believe that the future of money in cryptocurrencies. The longer-term price trajectory for bitcoin is undoubtedly upwards.”

DeVere Group estimates that nearly three-quarters of high-net-worth individuals will be invested in cryptocurrencies before the end of 2022.

Over $ 1.17B of Bitcoin longs liquidated

According to ByBt.com, BTC / USD liquidated long contracts worth $ 1.17 billion. The stop loss is triggered when the Bitcoin price falls back below $ 30,000 in the context of the spot market correcting, leaving derivative traders with open short positions in a profitable position.

Figures indicate that long position holders on Binance alone lost $339.37 million, followed by Huobi, whose traders suffered $258.1 million worth of losses. That eventually marked the Bitcoin market’s worst one-day liquidation after November 25 last year. On that day, long traders had lost about $999.52 million.

But everyone still bullish on Bitcoin. People treat Bitcoin as a safe-haven against falling bond yields and the US dollar. That serves as the same reason why billionaire investors like Paul Tudor Jones and Stan Druckenmiller have integrated the cryptocurrency into their portfolios. That further explains why MicroStategy, Square, Ruffer Investments, MassMutual, and others, have opted to invest in Bitcoin.

Forecast: Should prominent altcoins invest in 2021, Bitcoin price will reach $ 50,000 this year?