Even after a slight correction from a high of $ 11,500, the Bitcoin price has increased by nearly 20% in the past seven days. Some analysts are still arguing that bulls are overextended here. They cite funding rates, which is the fee that long positions pay short positions in perpetual futures markets to normalize market conditions. Funding rates are currently at highs not seen since previous Bitcoin tops.

According to the chart shared by cryptocurrency trader Inmortal on July 28, a significant trend indicator shows Bitcoin to move higher on a macro scale. The trend indicator is known as the “CM Super Guppy” – and had had extreme accuracy in predicting macro BTC moves. It recently flipped green on Bitcoin’s one-week chart, suggesting the formation of a macro uptrend. The Super Guppy has trended green on Bitcoin’s one-week chart only on a few occasions: once in late-2012, before the rally from literal dollars to $ 1,000; once in late-2015 to preceded the parabolic explosion to $ 20,000; and once in 2019, before it temporarily turned gray.

Commenting on the importance of recent signals, Inmortal trader shared the chart below with the following comment:

“The most bullish asset of the last decade ready to continue the trend. Don’t get left behind.” 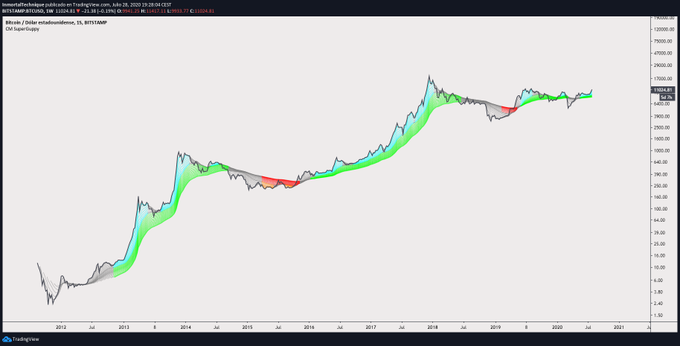 Corroborating the idea that Bitcoin is entering a long-term uptrend is fundamental. For one person, the enormous amount of printing money going on to prevent the world from the effects of the pandemic is expected to be a boon for Bitcoin.

Paul Tudor Jones, a billionaire hedge fund manager, commented on Bitcoin in May as follows:

“I am not an advocate of Bitcoin ownership in isolation, but do recognize its potential in a period when we have the most unorthodox economic policies in modern history. So, we need to adapt our investment strategy.”

It has also recently been reported that US banks now have the right to hold cryptographic keys for electronic wallets. That means they can now be custodians of Bitcoin, Ethereum, or other digital assets.

Space analysts think this news will be an accelerator for growth in the cryptocurrency industry. However, it is essential to note that banks holding cryptocurrencies are contrary to industry ethics.

Ripple made several transactions, totaling 98 million XRP, while its ODL partner moved half that amount

XRP price recent break above $0.22 has opened the gates to see a moonshot rally that sends it significantly higher