Shiba Inu (SHIB) holders who divested their holdings via ShibaSwap’s write portal are now starting to receive rewards in the form of Ryoshis Vision (RYOSHI), with some wallets already receiving thousands of tokens.

The first distribution of ShibaBurn Rewards are out now.

For those who burned $SHIB trough the burn portal and are holding $burntSHIB your rewards are available now.

According to the official Ryoshgis Vision account, the first reward distribution has been delivered to SHIB burners through the writing portal. Whenever users burn tokens through it, they are rewarded with burnSHIB, which can then be used to receive RYOSHI.

The team behind the meme-inspired cryptocurrency announced the launch of a burn portal that was set to be included in a new version of Shiba Inu’s decentralized exchange ShibaSwap earlier this year, at the time noting it would make it easier for the platform’s users to regularly burn SHIB and reduce circulating supply. According to the platform, the portal was launched on April 23; the SHIBArmy has burned over 29.4 billion tokens for a 9.6% APR. One large SHIB burning address that destroyed 1.3 billion tokens has received nearly $6,5000 in RYOSHI.

After SHIB holders burn their tokens, they receive burntSHIB, which allows them to get RYOSHI. To claim their tokens, they must “WOOF” them, which locks them in for a period of time, presumably to prevent token holders from immediately dumping their RYOSHI.

“This portal has been built to reward $SHIB burners, with a passive income acknowledgment, in the form of RYOSHI Rewards. Means that 0.49% of all RYOSHI transactions will be distributed to owners of burntSHIB”, the ShibaSwap burn portal stated.

According to Ryoshis Vision, rewards in the token were initially distributed to every holder of xSHIB, a token awarded to users who staked SHIB on ShibaSwap. For 20 weeks now, RYOSHI has been distributed to those who burn SHIB and those who stake RYOSHI on ShibaSwap and to the project itself. Notably, the burn portal may soon be complemented by a donation portal, which has been suggested by community members looking to further SHIB’s use as a charitable cryptocurrency. 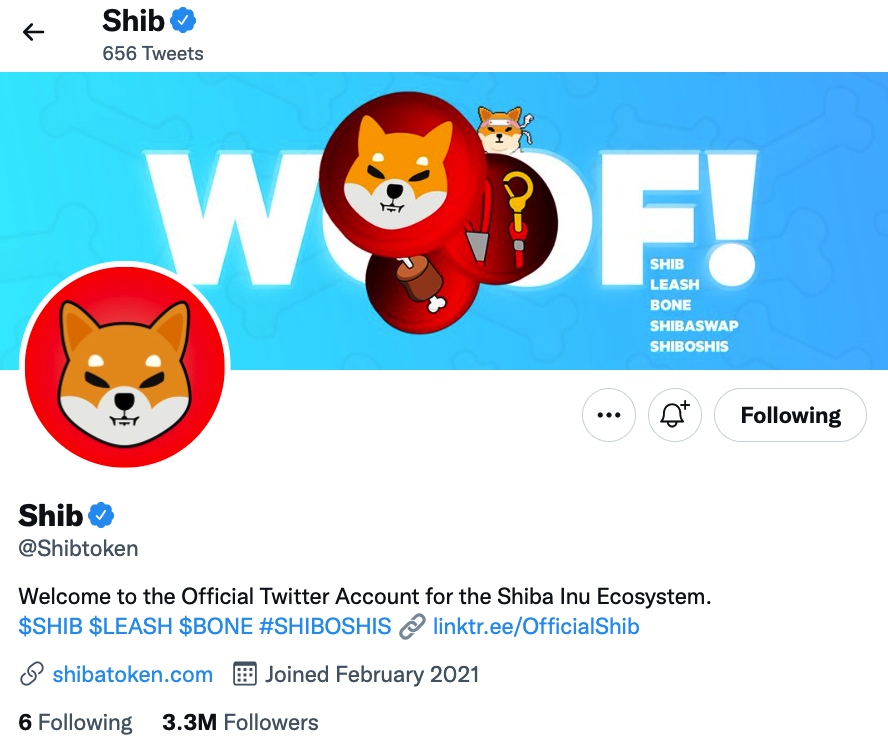 In addition to catching up with DOGE on Twitter, the number of wallets containing Dogecoin still exceeds its closest competitor, Shiba Inu. Dogecoin has around four million holders worldwide, while the total number of Shiba Inu storage wallets is 1,163,683. Since the end of April, this number has increased by 23,767 wallets.

Over the past few years, the growth in the number of Dogecoin holders has been fueled by Elon Musk’s tweets in favor of the largest meme cryptocurrency. Curiously, these tokens are down from their latest historical peaks by the same percentage value.