In the recent video, analyst Lark Davis has introduced 5 hottest new altcoins that coming to the market this month. 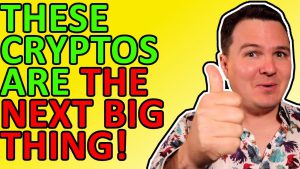 “This early-stage coin investment has been giving incredible gains to investors so you should not ignore”, Davis said.

The first coin on the trader list is AIOZ (AIOZ). AIOZ Network is a layer 1 blockchain-based Content Delivery Network (CDN), offering a decentralized streaming platform on the AIOZ blockchain.

Currently, AIOZ has nodes spread out across the world and a suite of products including AIOZ Tube (a video-sharing platform), AIOZ OTT (a subscription video service), and AIOZ TV (a live-streaming app).

“It will be its own blockchain AIOZ and currently has a working blockchain which is impressive for an early stage sale. They have 2000 plus nodes which again very impressive as well as a working wallet. Now AIOZ has been self-funding for around three years building out this product. Essentially they’ve also won many different hackathons, they have peer-reviewed technical papers”.

“It is not your average new project launch!”, the trader highlights.

The second coin on Davis’s list is BlindBoxes (BLES), a gamified marketplace for NFT.

Blind Boxes curates collections of digital assets from emerging creators, well-known brands, and famous NFT creators, and offers them in compelling Blind Boxes. This mystery box framework is similar to collecting packs of trading cards. Buyers know the overall components of a collection.

“However, interestingly, the exact NFT that they receive is only revealed once they unbox the purchase”.

Convergence (CONV) is the third altcoin on Davis’s radar.

Convergence is a new age protocol allowing both retail and enterprise users to swap between real-world assets and blockchain-based DeFi utility tokens seamlessly. Set to officially launch around Mar. 25, Convergence aims to be the go-to decentralized interchangeable assets protocol.

“Blockchain is literally the future of these markets and this is just a step towards that because it allows for these assets to enjoy instant settlement, automated issuance and of course the access to the future of finance by being able to tap into DeFi and of course to reach global markets which is a big deal”.

The fourth coin on the list is Deeper (DPR).

“Others have tried before deeper to do this with limited results but Deeper’s got a pretty impressive product here and if Deeper can get it right, then this is a coin with some massive potential”.

The last coin of the list is Shyft (SHFT). Shyft Network is a public blockchain protocol designed to aggregate and embed trust and validation into data stored on public and private ecosystems, and permissioned and permissionless networks.

Charles Hoskinson: Despite having no smart contracts, Cardano is already overwhelmingly subscribed