$24,000 Bitcoin price refuses to flip to support while the weekly close remains shrouded in uncertainty 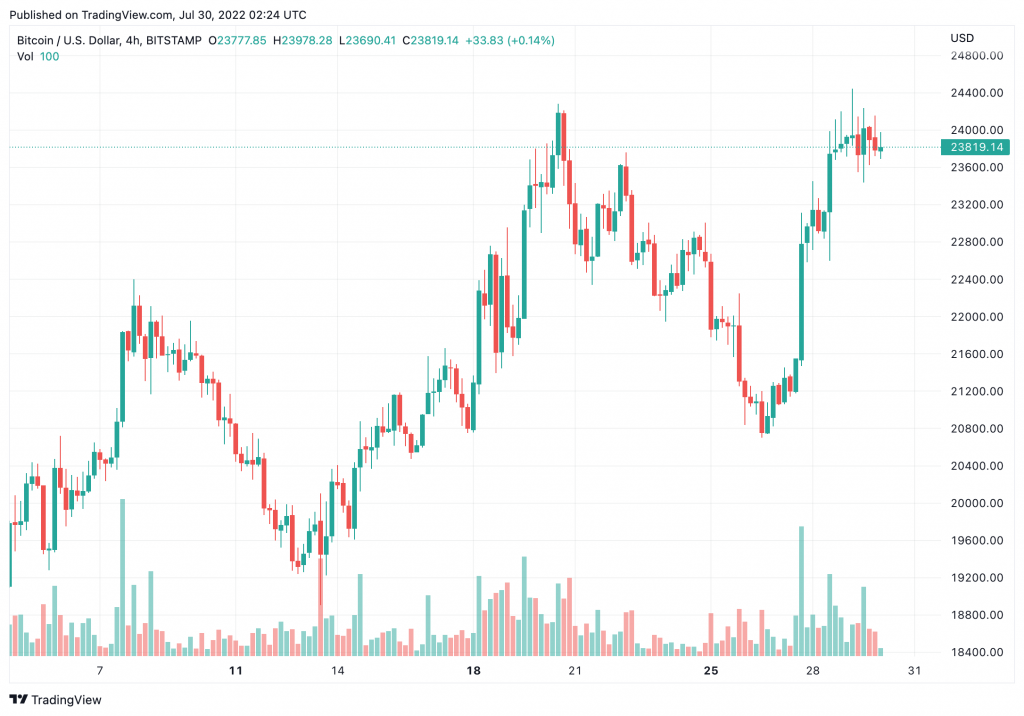 Data reflected bulls’ continuing struggle as BTC/USD lurched around the $24,000 mark on July 29. The pair had attempted to match the week’s local top of $24,450, this ultimately failing to materialize as a resurgent U.S. dollar pressured crypto despite the gains of U.S. stocks.

The U.S. dollar index (DXY) continued higher during Wall Street trading, passing 106 after falling to its lowest level since July 5. Record eurozone inflation added to the mix of macro triggers on the day, while the monthly close remained a guessing game for Bitcoin analysts.

On short timeframes, popular trader Crypto Tony eyed what he called a “classic short setup” around the high, which remained Bitcoin’s best since mid-June.

A classic short setup with a clear invalidation point ..

Did anyone catch it 👀 pic.twitter.com/DTW2rAYM9K

Nonetheless, other key levels remained apt to act as support in a deeper drawdown. These included Bitcoin’s 200-week moving average at around $22,800 and realized price of $21,820. In terms of the former, however, Bitcoin’s weekly candle would need to close for confirmation of a resistance/support flip, fellow trader and analyst Rekt Capital noted on the day.

#bitcoin back above realized price, light blue, I like it😎 pic.twitter.com/Rr0r4boljC

Summing up 2022 for crypto markets so far, a new report from on-chain analytics firm Glassnode and markets site CoinMarketCap hinted at how long the road to recovery could be.

After the mayhem, which began with the Terra (LUNA) — now renamed Terra Classic (LUNC) — collapse in May, a “resetting” had occurred throughout crypto assets, the report argued. With Bitcoin and Ether (ETH) alone down 75% from all-time highs in under a year, it may not be until 2023 that the trend can change definitively.

“The market has only been in this position since mid-June, and previous bear cycles have taken an average of 180-days before full-scale recovery was in effect,” it read.

Glassnode and CoinMarketCap, in particular, highlighted the plight of miners who, as Cointelegraph reported, faced ongoing profit margin squeezes over Q2 and more recently. The report concluded:

“All in all, 2022 has thus far been a major resetting of market expectations, a wide-ranging de-leveraging, and ideally, the start of a new set of foundations, upon which even taller structures may be built,”

The accumulation we are seeing now might be a direct…